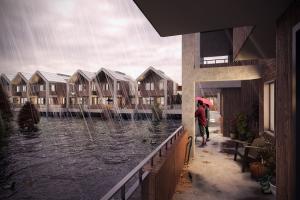 More than half a million properties in England are at risk of coastal flooding, according to a major new report on the expected impacts of climate change.

And within a century, up to 1.2 million homes could be located in areas where there is a significant level of flood risk, including coastal erosion.

The independent Committee on Climate Change (CCC) has called for a new, long-term approach to coastal management as climate change causes sea levels around the UK to rise by up a metre or more.

In its report, Managing the coast in a changing climate, the CCC says coastal communities, infrastructure and landscapes in England are already under pressure from flooding and erosion, pressure that will only increase in the future.

There's a lack of urgency about dealing with communities and infrastructure that is unlikely to survive in its present form, according to the report, while current plans to deal with coastal areas are unrealistic about the actual implications of climate change. Nor is there enough funding or legislation to put that right.

The CCC's Adaptation Committee says 520,000 properties in England, including 370,000 homes are current in areas at risk of damage from coastal flooding; 8,900 are actually at risk of being lost complete through coastal erosion. Both flooding and erosion cause more than £260 million worth of damage every year on average.

Current approach ‘not fit for purpose'

The report predicts that by the 2080s, up to 1.5 million properties, including 1.2 million homes, could be in areas at significant level of flood risk with 100,000 properties in areas at risk from coastal erosion. Roads, railway lines, railway stations and historic landfill sites are also in danger.

The report has made five recommendations that the authorities in charge of England's coastal areas should follow, including communicating the risks of coastal erosion to the people who live there and working with those affected communities.

Professor Jim Hall, the CCC Adaptation Committee's expert on flooding and coastal erosion, said: "As the climate changes, the current approach to protecting the English coastline is not fit for purpose. It's time people woke up to the very real challenges ahead.

"As sea levels rise and flooding and erosion get worse, we have assessed that current plans for around 150 kilometres, or 90 miles, of the coastline are not cost-beneficial to implement.

"The Government and local authorities need to talk honestly with those affected about the difficult choices they face. Climate change is not going away: action is needed now to improve the way England's coasts are managed today and in the future, to reduce the polluting emissions which cause climate change, and to prepare seaside communities for the realities of a warming world."

When you instruct a conveyancing solicitor through Homeward Legal, they will also commission a number of important local authority searches. Among them is a flood risk report, available through our sister site Searches UK, that will reveal whether the property you intend to buy is in an area at significant risk of flooding.

Having that detailed information to hand will help you decide whether to proceed with your purchase, acting on the expert advice in the flood report. Talk to our team now on to instruct conveyancing services. We work closely with Searches UK to give you all the information you need on the necessary searches.

You can also get an instant, no-obligation quote for conveyancing online.