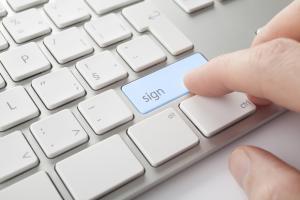 The world of conveyancing moved a step further into the 21st century this month with the first-ever electronic e-signature exchange of contracts on a UK residential property transaction.

Until now all contracts have been signed in conventional fashion, with pen and ink, but adding an electronic signature to process heralds a positive and welcome change in how solicitors and conveyancers can now proceed with sales transactions.

Convey Law became the first conveyancing firm in the UK to conduct an exchange of contracts using an electronic e-signature. They helped seal the deal for their clients using the Bonafidee e-signature facility at their offices, signing the contract for both the sale and purchase parts of the contract.

The Bonafidee system provides a confidential way for solicitors for both buyer and seller to upload the agreed sales contract to a secure site that both buyer and seller can access, providing proof of identity through a series of verification measures, and then add their electronic e-signature to the document.

The system's security measures then confirm to each solicitor that the contract has been read and signed using a specially generated code that replaces a physical signature.

Once the newly signed document had been downloaded by Convey Law, the contracts were exchanged in the usual way governed by the Law Society.

This new electronic could help significantly speed up the conveyancing process, something which both buyers and sellers would undoubtedly welcome.

Gareth Richards, legal director of Convey Law, said: "This is definitely a significant step in the right direction in relation to e-conveyancing and we are delighted to have been a part of it."

Steve Toms is co-founder of Bonafidee, which he described as "innovative technology". He added: "Paperless processes not only save time and money but also add rigour and compliance with an audit trail that records the actions taken during the signing process."

Innovative practice can benefit our clients

Convey Law is a member of the Conveyancing Association and therefore a member of the nationwide panel of solicitors and conveyancers used daily by Homeward Legal. This new and innovative practice is sure to spread out across the industry.

Homeward Legal clients are always assured that the conveyancing professional dealing with their transaction is acting in timely and comprehensive fashion, but knowing that contracts can be exchanged at the click of a button will provide greater reassurance that a transaction will be completed fully.

To get the best deal for your house sale or purchase, call Homeward Legal now for a fast, no-obligation quote or click here.